Beaming smiles all round at ITFA End of Year Grading & Awards!

The penultimate weekend of the ITFA Taekwon-Do Term 4 was a busy one, jam packed with excitement and hard work!!! 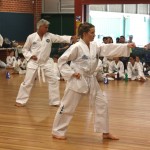 On Saturday 6th September it was the Term 4 Colour Belt Grading at ITFA Randwick. As always there were a good number of students form 10th Kup to 2nd Kup taking the floor including junior, teenagers and adults. The ITFA was also please to welcome our two Instructors from Gippsland, Mr Nathan Hill (Bruthen) and Mr Adam Collins (Sale), both I Dans. 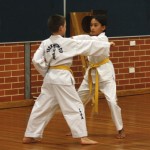 Most of the students were early for Registration and hovered nervously at the back of the hall until they were allowed onto the floor to run through their Grading Syllabus. Master Rhee opened the event at 2.30pm welcoming all the parents, families and friends who had come to support the event. We then moved quickly onto the 2014 End of Year Group Photo. 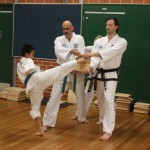 The 9th Kups were first up on the floor, with Mis Sherlock (V Dan and International Instructor) giving commands. Students moved through their pattern, fundamental movements and step-sparring before coming to the table for questions and terminology. All students from 7th Kup and above were then required to perform the required breaking. At 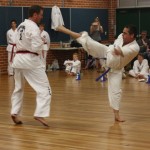 7th Kup, the student may designate either side kick or turning kick and which leg they are going to break with. They must also be able to name the tool before they are allowed to break. Moving up the grades they must be able to perform both left and right side and turning kicks at solar plexus height. Moving to 4th Kup, the student must then break with reverse turning kick, and to progress to 3rd Kup, reverse turning kick with the right and the left foot. They then move into other techniques such as elbow strike or front punch, requiring 6 breaks to go first time to progress to 2nd Kup, 10 breaks for 1st Kup and 12 breaks for I Dan. 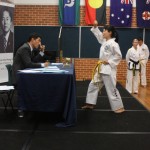 who promoted at the Term 2 Grading were all on hand to assist the Black Belts and were given an opportunity to practice some of their Grading Syllabus on the floor in preparation for their Black Belt Grading, hopefully in 2015. The ITFA Black Belt Grading is over two full days of training at an International Instructor Course with the formal Grading at the end. This gives the Examiner many opportunities to see the student perform as well as the student being able to demonstrate their knowledge and skills across the entire Colour Belt Syllabus. There are only two opportunities for 1st Kups and above to grade each year at thes 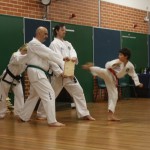 At the conclusion of the Grading, Master Rhee presented the successful candidates with their certificates of promotion. There was one ‘A’ pass which was awarded to Brinley Meyer, 10th Kup, who had an exceptional performance.

Master Rhee then presented ‘Thanks You’ cards and gifts to several Students and Parents who have assisted the ITFA this year. This was closely followed by the 2014 Student of the Year Presentations. Miss Sherlock had two awards for her students. William Johnson received the Ultimo Award for Attendance and David Hanna received the Waverley Award for Perserverance and Attendance. 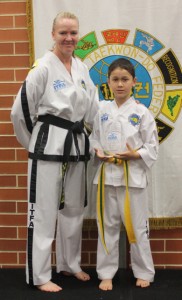 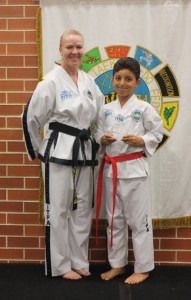 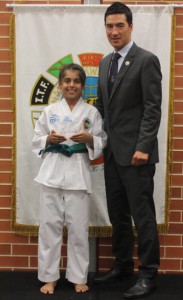 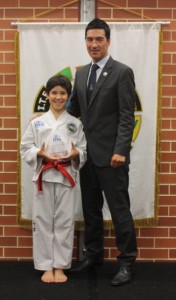 2014 ITFA Most Improved Junior Student of the Year: Kyle Varshavsky 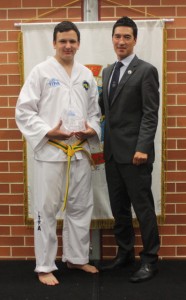 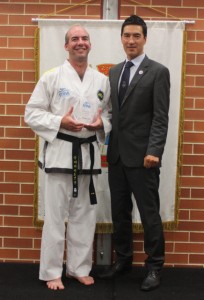 2014 ITFA Most Improved Senior Student of the Year: Stephen Cacchia 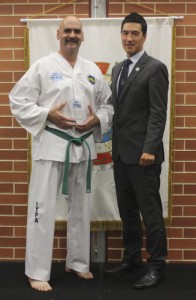 The afternoon finished off with the customary BBQ and games, a great event to finish the year!!!! 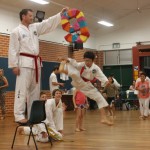 Sunday afternoon was the final ITFA Black Belt Training session for the year. The 1st Kups were keen to get in as much practice as possible before the summer break so as to be able to continue to prepare for their big Grading next year. Mr Collins from ITFA Sale was able to attend and get some more valuable insight into his own training as well as some tips for teaching in his own class.

Master Rhee had each student on the floor individually at some stage for pattern and correction. There was opportunity to practice breaking on all of the ITFA holders as well as Step Sparring and Terminology.

The last week of term was reserved for congratulating students at class and presenting the successful students with their new belts. The mats came out with the competition sparring gear for some end of term fun and every student went away with some new moves from their new pattern!