End of 2013 Grading and Student of the Year Awards 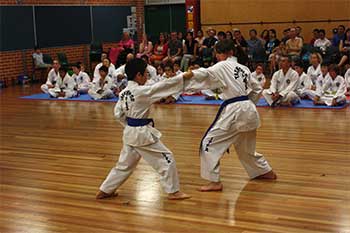 It was a beautiful sunny day, as the students arrived nervously at 2pm. All the parents sat anxiously at the back of the hall as the students got up on the ‘T’ marks and practiced their patterns and step sparring.

Master Rhee arrived promptly for a 2.30pm start and welcomed the students and parents to this momentous day in ITFA history. At this Grading there were 9 students trying for their promotion to 2nd Kup, Red Belt. Some of these candidates where the first students Master Rhee had taught from 10th Kup White Belt to 2nd Kup Red Belt in Australia and if successful would mean all colours would be represented in Master Rhee’s classes by students he had taught from their very first class!

The grading took about two and a half hours and included all aspects of the Grading syllabus:

It was a successful day with all candidates passing and promoting to their next grade!

After the Grading, Master Rhee and Miss Sherlock presented their respective ‘Student of the Year 2013’ Awards. Jack Keating was names ‘ITFA Waverley Student of the Year 2013’ by Miss Sherlock. Jack, now a newly promoted 2nd Kup, began his training with Master Rhee back in October 2009. He has shown commitment and dedication to his training, attending the 2013 ITFA Championships and both FGMR 2013 Colour Belt Seminars.

Following the awards Miss Sherlock, who has known Master Rhee her entire Taekwon-Do career, made a moving speech about how inspiring Master Rhee is and how the ITFA is very lucky to have such a knowledgeable and successful Instructor. She presented him with a bottle of wine and a large bar of Galaxy chocolate (his favourite!) as a thank you for all his hard work.

Then it was time for the BBQ and the games that have become a tradition at this end of year event. Thanks to Mr Gary Mezei who kindly organised the BBQ so all the attendees were duly fed! Miss Sherlock then continued the tradition of providing two piñatas in the shape of the number ‘9’, a significant number to the Founder of Taekwon-Do. The children lined up and performed Taekwon-Do techniques in an attempt to break the piñatas open. It wasn’t long before there was success and the floor was awash with bodies after all the sweets and lollies!! A great finish to a great day and a fitting celebration to close 2013 for the ITFA!