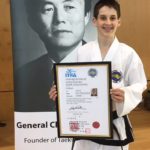 Reaching the level of Black Belt is often one of the main goals for students starting a Martial Art. However, it is not an easy level to achieve, especially when you are following the Founder’s syllabus in ITF Taekwon-Do. A journey that tests the 5 tenets to the limit for every student, it is a physical, emotional and mental journey lasting over a couple of years.

In the ITFA, the colour belt gradings usually last anywhere from 2-4 hours and the students perform their own grade syllabus but always have to be ready to show anything from their previous Grading exams.

In contrast, the Black Belt Grading takes place over a weekend. In preparation for the experience, all 1st Kup (Red Belt, Black Stripe) students must attend an International Instructor Course (IIC) prior to applying to grade. This prepares the student for their Grading as it means when it comes to their turn, it is not an unfamiliar experience. There are also no surprises on an ITFA Grading. The syllabus is clearly laid out and is tested on several occasions leading up to application, including a pre-Grading at an IIC. Any part of the Colour Belt Syllabus from 10th Kup (White Belt) up to 1st Kup (Red Belt Black Stripe) can be examined at any time over the weekend. The IIC then culminates with the Black Belt Grading at the end of the course on the Sunday afternoon – when you, the student, have already been tested informally physically, mentally and emotionally all weekend. This is when exam conditions are in place, Examiners behind the table and it’s time to show your mastery of the syllabus. 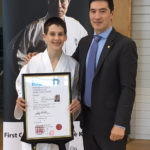 The ITFA follows the ITF Taekwon-Do Encyclopaedia and follows the syllabus as laid down by the Taekwon-Do Founder, General Choi Hong Hi. Students will perform Pattern, Sparring, Breaking and Terminology.

Recently, Senior Master Rhee, VIII Dan, ITFA Founder, Examiner and Chief instructor travelled to Rockhampton, Queensland to teach and IIC and preside over a Black Belt Grading. Below is Mr Kaine Kennedy’s account of his preparation and experience of Grading to I Dan:

“My first taste of what ITFA Gradings were like, came in the form of a pre-grading in April at the Sydney IIC. After that pre-grading I knew that the biggest thing I needed to work on was my breaking. I was able to improve my breaking by working on it at home almost every day in the months leading up to my Grading. This resulted in me getting all but one of my breaks on the day of my Grading.

In the months leading into my Grading I was very fortunate to be able to do many virtual lessons with Senior Master Rhee. Not only did this help me become more comfortable performing in front of Senior Master Rhee, the advice he gave me during these lessons on how to improve was fantastic, similar to the sort of advice I would get at a seminar.

By the time the weekend of the Rockhampton IIC arrived I was feeling confident and ready to show what I could do. On the day of my Grading I was extremely nervous but I was also confident that I would pass. The preparation I had undertaken since my pre-grading and the many hours of training I had done outside of class had given me this confidence and allowed me to obtain my Black Belt while really feeling like I had earned it.” 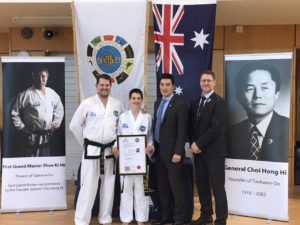