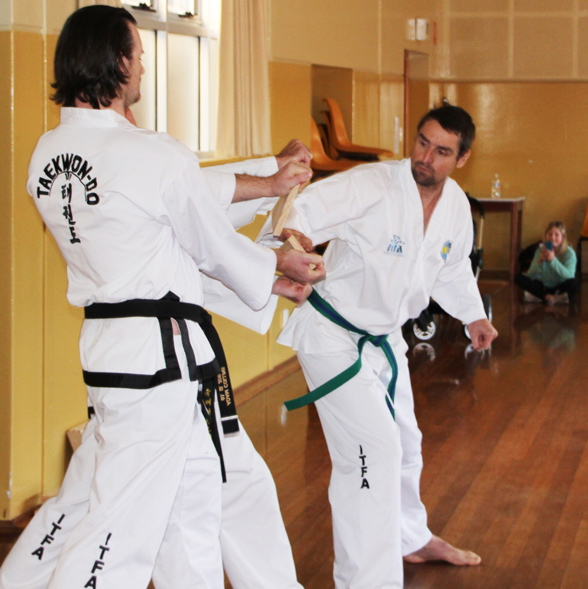 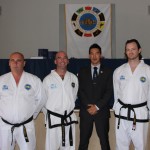 ITFA Founder Master Andrew Rhee travelled to country Victoria two weeks ago to preside over the first Grading to be hosted by ITFA Sale and Instructor Mr Adam Collins, I Dan.

On Saturday 21st March, Master Rhee conducted 5 hours of Black Belt Training for Mr Collins and fellow ITFA Gippsland Instructor, Mr Nathan Hill, I Dan. The I Dan syllabus was covered including patterns, foot sparring and terminology. It was also an opportunity for both Instructors to pick Master Rhee’s extensive experience in teaching the Colour Belt Syllabus.

On Sunday 22nd March, ITFA Taekwon-do Sale hosted its first official grading since the club was formed in late July 2014. Instructor, Mr. Adam Collins was proud to see his first group of 9 students from the Sale club put through their grading syllabus alongside 5 students from the ITFA Bruthen club.

Master Andrew Rhee, VII Dan, officiated over the proceedings beginning by introducing himself and giving a background on the ITFA to the adult audience. All the grading attendees were then put through their paces with fundamentals and a challenging knowledge test for all students.

After overcoming some initial nerves, all attendees performed well, with Charlie Hayden from ITFA Bruthen receiving an A grade pass for his efforts.

Gary Barron displayed some advanced destruction techniques for his 4th Kup (Blue belt) grading-showing all attendees what to expect during the later stages of their Taekwon-do journey. He gave a successful demonstration of reverse turning kick, turning kick and knife hand side strike board breaks.

On behalf of ITFA Sale, Mr. Adam Collins was pleased to see the progress of all students and see them all successfully promote to their next grade. 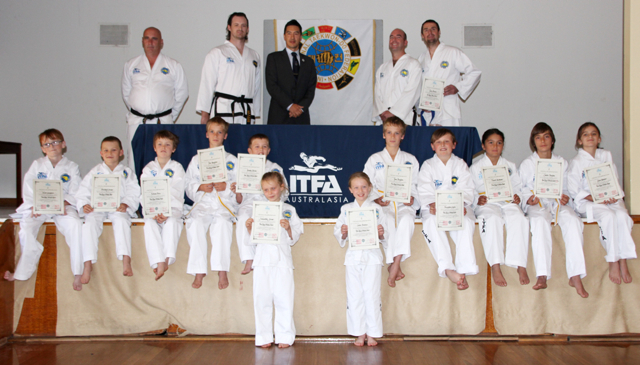 No Comments to "First ITFA Grading in Sale a Resounding Success!!!"