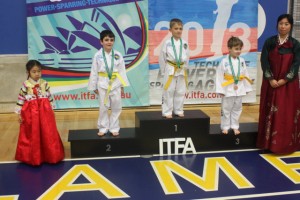 Over 80 competitors and officials from 4 different ITF-style Taekwon-Do groups came together last Sunday at Sydney University Sports and Aquatic Centre to take part in the  2014 ITFA National Open Championships! 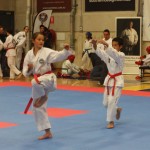 The weekend started on Saturday afternoon for the ITFA set-up crew who transported all the equipment into the hall to set-up for the next days competition. The hall looked amazing with two World Championship sized rings, staging, banners, a winners podium, a brand new adjustable holder and much, much more. 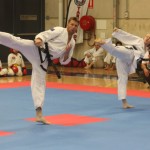 The participants started to roll in at 8am ready for  registration. The line up was complete with officials along the front row. It was the first time officiating for some of the ITFA 1st Kups who looked a little nervous in the front row. We were also privileged to have our medal bearers in traditional Korean Dress, again bringing an air of authenticity to the ITFA event. 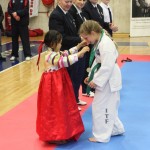 The Championship was officially opened by Master Andrew K H Rhee. the hall was still for the Australian National Anthem and then Master Rhee addressed the audience. This was followed by the presentation of the new ITFA FGMR pin, a replica of FGMR’s fist. All ITFA Black Belts in attendance were lucky to be the first to receive the pin, after FGMR of course! Then all competitors and officials were presented with their participation certificates by Master Rhee. 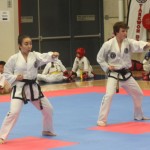 The ITFA tournament then got underway with pattern. There were some hard fought categories, especially in the Open Black Belt categories. It was great to see students from different groups providing a high standard of competition for the judges. There were a few nerves with some competitors forgetting moves at crucial stages but performing under pressure is what it’s all about! 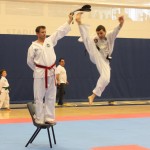 Free sparring followed pattern with some great exhibitions from the junior grades. There was some amazing aptitude for sparring showed all the way through the age groups from under 8 through to the Open section. The Under 18 divisions all adapted well to the ITFA rule of no head contact allowing for a fun, yet competitive sparring. 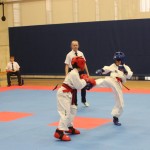 There were no easy matches which was evident again in the Black Belt divisions. The Open Black Belt divisions were umpired by Master Andrew K H Rhee, an International Umpire. The categories were fiercely contested but supremely controlled with Master Rhee in the centre. There were some great match ups from students who had never sparred each other before, making for some true competition. With several students in preparation for travelling overseas to compete later in the year, this was a fantastic opportunity to practice against new opposition. 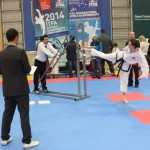 In the power category, the brand new ITFA holder came into it’s own as competitors experienced a World Championship level event. The holder was able to be moved to the solar plexus height of each competitor for their leg breaks and adjusted to the competitor for hand breaks (in Australia breaking is practiced at hip height which is not the international standard). Master Rhee provided insight and instruction to the competitors before the event began in the proper protocol for power. With Master Rhee personally overseeing the breaking, it was good to see a professional approach to the event.

ITFA Agility consists of Flying long and Flying high kick. No longer referred to as ‘Special Technique’ as the techniques are basic and can be performed by most grades, Agility was again fiercely competitive across all grades. Without a special technique holder, the officials were able to improvise to still provide a meaningful competition. 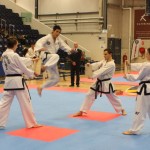 ITFA Special Technique is open to Black Belts only and requires the competitor to break a minimum of three 1/2 inch wooden boards in the air before landing. Four Competitors good up the challenge and offered different techniques. No one person achieved a minimum of three breaks so there is still plenty to aim for in 2015.  Team Pattern was the last category with teams putting together some last minute efforts. 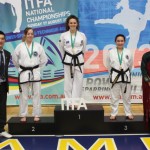 The Taekwon-Do Championship was brought to a close by Master Rhee at about 5pm. All categories were complete with lots of happy faces and lots of medals clinking around many different necks! It was great to see such good sportsmanship amongst different ages and groups.

We look forward to the 2015 ITFA National Open Championships – watch this space!!!!