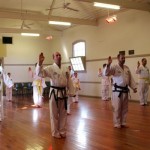 On Sunday 8th June, Mr Nathan Hill, I Dan and ITFA Bruthen hosted its second Grading of 2014. Master Andrew K H Rhee flew down to Melbourne to travel to East Gippsland, Victoria for the weekend.

It was great to see a contingent from ITFA South Canberra with Mr Shane Goddard, I Dan attending with his daughter Miss Eliza Goddard, I Dan and once of their students for the morning Grading. 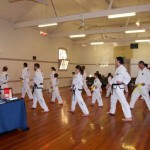 There was also support from another local instructor Mr Adam Collins, I Dan.

It was a milestone Grading for ITFA Bruthen showing the club continues to grow in strength. It witnessed club history with it’s first ever students completing destruction, breaking wood to promote to 6th Kup (Green Belt). The club now boasts a full range of junior colour belts from 10th to 6th Kup, a great achievement for Mr Hill who only opened the club 18 months ago. 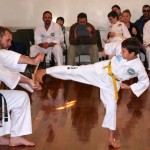 ITFA Bruthen always treasures the time they get to spend with Master Rhee. We are all looking forward to his next visit later in 2014 and further growth of our club!