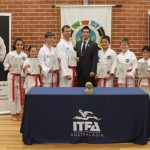 As the ITFA approaches it’s 4 year anniversary, another milestone was reached by Master Andrew K H Rhee. With over 30 students successfully promoting at the ITFA Winter Grading, 8 students graded to 1st Kup. 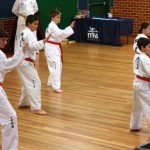 Back in the UK, Master Rhee has produced over 40 Black Belts, from 10th Kup to Black Belt, so it should come as no surprise that he is being so 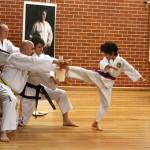 successful here in Australia. Master Rhee’s most senior student is Mr John McMillan, who was promoted to VI Dan by FGMR in Glasgow, Scotland in 2010 before Master Rhee left for Sydney. Seven of the eight new 1st Kup students began their Taekwon-Do journey under Master Rhee’s tutelage after he established the ITFA in Australia in July 2010. Dimitri Falidis, one of Master 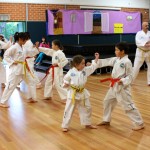 Rhee’s very first students at ITFA Waverley, started Taekwon-Do in September 2010 and has had to balance his love for Rugby with a commitment to Taekwon-Do to reach his 1st Kup. Matthew Stopic, Andrew Jamhour, Lauren Young, Tyler Robertson all followed, starting their own respective journeys in early 2011. Jack Keating and Corine Hanna are still training at ITFA Waverley where Miss Marion Sherlock, V Dan and International Instructor, took over from Master Rhee two years ago. Paul Rafferty, originally from Northern Ireland, had taken a break from Taekwon-Do after previously reaching red belt. After a number of years off, he returned to class and has now reached 1st Kup under Master Rhee’s tutelage. 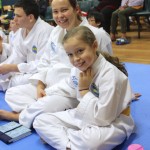 It was a sunny warm winter’s afternoon, with grades from 10th Kup through to 2nd Kup represented on the floor. There were plenty of nerves around from the 10th Kups at their first Grading through to the 2nd Kups, for whom it would be their last Colour Belt Grading. It was great to see several families represented and not just siblings but including parents and children. The Mezei family, the England family and the Pollack family all showed how Taekwon-Do can bring families together and how Taekwon-Do crosses the generations!

The Grading started with a group photo and then the 2nd Kups were straight onto the floor to start performing their patterns. As the afternoon progressed, the grades where punctuated by the 2nd Kups who were reuiqred to assist with Step-Sparring for other grades as well as performing the full 2nd Kup syllabus of Hwa Rang Tul, Step Sparring, Terminology, 2 vs 1 Free Sparring and Destruction.

There are two students awarded an “A” pass for their exemplary performance on the day: 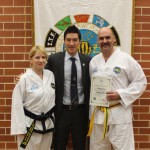 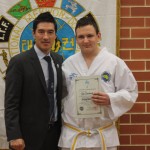 All students were presented their certificates at the grading and their belts at class. Everyone has learnt part of their new pattern to practice over the school holidays. The 1st Kups now await their first ITFA Black Belt Training Session on Sunday 6th July as they start the next stage of preparation to their next grading which will be at the end of a full weekend International Instructor Course!