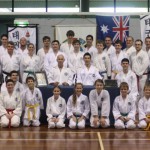 Master Rhee travelled back up to Rockhampton in Queensland on June 13th for a weekend event begin hosted by Mr Doug Swain, V Dan and Doug’s Dojang. 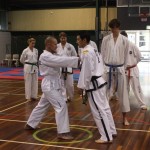 This was the second time Mr Swain had invited Master Rhee up to teach the local Taekwon-Do community. Whilst Doug’s Dojang hosted the event, it was open to all Taekwon-Do practitioners, regardless of affiliation. It as great to see groups coming together once again to enjoy learning the Art together! 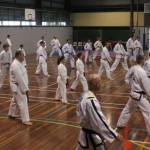 The weekend began with a Black Belt Grading, where Master Rhee was invited to observe. There were three candidates who performed the Doug’s Dojang syllabus. Mr Brown and Mr Kennedy were both successful promoting to II Dan and Mr Nunn was promoted to I Dan. The evening topped off with a light dinner back at Mrs McNae’s house, where many Grading stories were shared around the table amongst the Black Belts and their families. 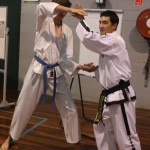 The first Master Class was on Saturday afternoon with a large contingent from Mr Pritchard and Mr Moore’s Rockhampton-based clubs. ALl grades were on the floor from the beginning with the tuition being driven by the questions the students brought to the Class. Master Rhee began with fundamental, which starts on the floor with stances. The junior grades asked plenty of questions as Master Rhee showed the students how a walking stance works and how important it is that it is correct, otherwise the Taekwon-Do technique will fail!

The Class moved onto low blocks and the different starting positions for outer forearm low block and knife hand low block in relation to they application. U-shaped block was also discussed at length with a few tricks to help get the movement correct when teaching to a newly promoted Blue Belt.

After the Junior grades were dismissed, it was time for pattern. Master Rhee went through the movements in Hwa Rang in some detail with some points from the Grading the night before. Saturday night was the official dinner at the local tasty Thai restaurant. It was a great opportunity to mingle and chat about the days events and get to know everyone a bit more on a personal level. 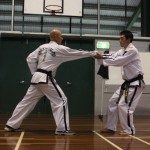 Day 2, on Sunday, began with discussion around circular block and it’s application with both one and two opponents. Master Rhee also moved on to cover body positions. In particular he clarified back facing and back kick. There was some great demonstration of the different between back kick, spinning side kick and side back kick. These techniques are commonly confused so the clarification was greatly received! 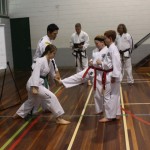 The Senior grades moved onto Choong Moo and then grade patterns. The newly promoted Black Belts had an opportunity to start their new patterns, whilst those who are shortly competing overseas got some insight and correction from Master Rhee, in relation to competition pattern performance and what international umpires are looking for. 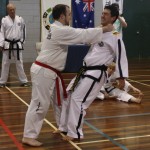 The Classes concluded with the presentation ITFA Attendance Certificates by Master Rhee to all course participants. It was a great weekend among good company!