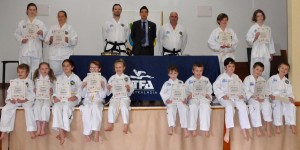 On Saturday 1st of August, ITFA Founder Master Andrew Rhee, again travelled to country Victoria to preside over the second Grading to be hosted by ITFA Sale and Instructor Mr Adam Collins, I Dan for 2015. 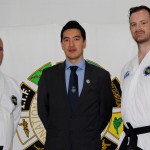 The day began early for Master Rhee, first travelling from Sydney to Melbourne then to Regional Victoria. The training began with a four hour Black Belt session for ITFA Sale Instructor, Mr Adam Collins with his senior student, Mr Andrew O’Brien. Master Rhee covered 3 step sparring in depth, as well as providing correction and tuition on Black-Belt patterns sharing his expert knowledge on the 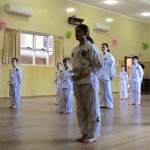 On Sunday 2nd of August in Sale, Master Rhee presided over the Colour Belt Grading, thoroughly testing the 14 students who had proved themselves capable of being graded in the weeks before. There were seven 9th Kup’s, and seven 10th Kup’s in attendance, showing positive signs of improving numbers in the region, almost doubling in size since the first region grading in March 2015! 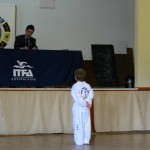 All students performed well, with Brenton Morrison, achieving an “A” pass. As an extra reward for his effort, Mr Adam Collins presented him with a copy of “This is Taekwon-do” by ITFA patron, First Grand Master Rhee Ki Ha (FGMR), during class after belt presentations.

On behalf of ITFA Sale, Mr. Adam Collins is pleased to see the progress of all students and see them all 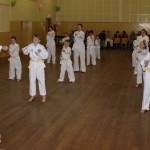 successfully promote to their next grade.

Contact acollins@itfa.com.au for more details on ITFA classes in Sale