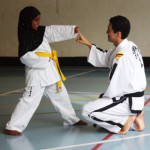 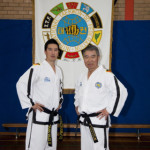 Born in the United Kingdom in January 1970, Senior Master Andrew Kang-Hae Rhee is the eldest son of First Grand Master Rhee Ki Ha (FGMR).  He began his Taekwon-Do journey at the tender age of 6. When his father wasn’t away from home and pioneering Taekwon-Do around the world he would be teaching his son to punch, block, kick and count in Korean.  This provided our Senior Master with a good solid foundation on which to build his Taekwon-Do knowledge and technique. He eventually entered his first structured class at the age of 7 under the guidance of UKTA Instructor Mr Paul Kelly, 2nd (II) Dan. Mr Kelly’s ‘Atherstone’ Dojang is still in existence today to this day and is possibly one of the longest running Taekwon-Do schools in the UK. 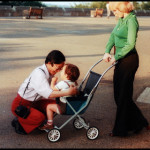 Senior Master Andrew Rhee promoted to 1st (I) Dan Black Belt in March of 1988 and soon after that began assisting FGMR in the teaching of his Academy classes.  This allowed his father to groom him in an Assistant Instructor role, with a view to eventually opening his own schools.  By August 1990, Senior Master Andrew Rhee had opened 5 schools in and around the Glasgow area. Several of those schools are still in operation today under the tutelage of his long serving students, Mr John McMillan, 6th (VI) Dan & Mr Ronnie Carruthers, 3rd (III) Dan. 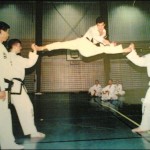 Throughout his time in the UK, Senior Master Rhee hosted many Taekwon-Do events at both national and international level. He hosted the Scottish Open National Championships in 1992, 1993 and 1995 as well as the UK Open & 4-Nations Championships (England, Scotland, Wales & Ireland) in 1997. In 1994, aged 24, he promoted to 4th (IV) Dan International Instructor, thus achieving the first goal he set himself when he was a young boy. 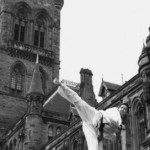 “You’re either a competitor or an instructor, not both. The student cannot meet the Instructor in the competition arena. You can either have a short career in competition or a long career instructing.”

It was after this conversation, that Senior Master Rhee retired from competing to follow the Founder and his father advice and focus on teaching the Art. 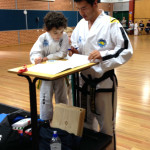 In April 2000, and then 5th (V) Dan, Senior Master Rhee organised, co-ordinated and hosted the ITF Millennium Seminars in Leicester, England. The event was conducted by FGMR and Grand Master Choi Jung Hwa, then 7th (VII) Dan Master, the son of the the Founder of Taekwon-Do, General Choi Hong Hi. The enormity of the event was incredible with over 400 participants attending and 12 countries represented.  It was little surprise that Senior Master Rhee proclaimed the ‘Millennium Seminars’ as “The greatest event I have ever had the privilege to be involved in organising”.  Little did he know that he was soon to eclipse this major event.

From July 2000 to October 2001, Senior Master Rhee’s Taekwon-Do status was elevated further on a global scale when he was promoted to Personal Assistant to General Choi Hong Hi, the Founder of the Art. Master Rhee was to accompany the Founder during his European Seminars, covering 5 countries and including his home city of London where he practiced Taekwon-Do as a teeneager. Master Rhee fondly recalls boarding the plane to France to link-up with General Choi,

“I was feeling all sorts of emotion, excited, honoured, proud… scared! Besides assisting the creator of Taekwon-Do, I was going to be rooming and serving the General during our time together.  It really was an envious position & I thank my father, FGMR, for creating the opportunity” 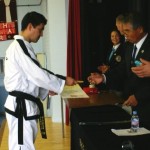 Master Rhee received his promotion to VII Dan from his father, FGMR

On September 9th 2009 (09/09/09) Senior Master Rhee’s life-long ambition came to fruition,  when he promoted to the rank and status of 7th (VII) Dan and Master. At the age of 39 years, 7months and 21 days, he was at that time the youngest ITF Master in the world.  During his promotion Grading Senior Master Rhee was informed that there were many Masters throughout the world and if promoted to Master, what difference did he think he could bring to the Art? Senior Master Rhee replied,

“I will teach anyone, anywhere, anytime. No student will ever be too far away… I will be the People’s Master”

Following his promotion to Master, his workload as a Taekwon-Do instructor increased. Senior Master Rhee accompanied and assisted his father during Seminars in England, Scotland, Norway, Finland, Canada, Australia, China and both North & South Korea, as well as attending the European Championships in Italy as a guest of Honour with FGMR. Master Rhee recalls,

“My first 12 months as a Master really did seem to be spent on the road!” 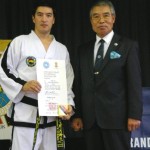 Senior Master Rhee with his father, FGMR after his Grading to VII Dan

It was whilst assisting his father during the Australian Seminars that Senior Master Rhee identified an opportunity to relocate to Sydney, NSW, where he thought he could put his knowledge and expertise to good use. His father, FGMR had pioneered Taekwon-Do from its infancy to maturity in Europe where he is recognised as ‘The father of European Taekwon-Do’. However, both General Choi and FGMR had neglected Australia in comparison to the rest of the world and Senior Master Rhee saw Australasia as needing some guidance and assistance in updating its’ Taekwon-Do. Senior Master Rhee states,

“I have noticed that the education, moral-culture, etiquette & attention to detail when executing technique were a little dated & I truly believe I can help raise the standards of Taekwon-Do throughout this vast continent,” 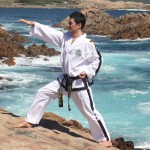 He landed in Sydney on July 9th 2010 and following some lengthy dialogue with the Australian NGB, was refused membership due to, ‘not being Australian’. Our Senior Master wasn’t going to be stopped by politics though and quickly formed his own Organisation, the ITFA. Within its first year the ITFA established schools throughout Eastern Suburbs of Sydney and even had an instructor in Melbourne. By the end of year 3, the ITFA was represented in Sydney, Melbourne, Canberra, Brisbane, Gippsland, New Zealand and even Buenos Aries, Argentina, making the ITFA one of the most exciting global Taekwon-Do organisations for the future of the Art.

Senior Master Andrew Rhee is dedicated to the promotion of Taekwon-Do. Since arriving in Australia in 2010 he has conducted Seminars in 4 of the 7 Australian states, New Zealand, Malaysia, Canada and the United Kingdom.  For a man who sees distance as no object, seeing the quality of the time spent in the Dojang (training hall) teaching, Senior Master Andrew K H Rhee truly is… “The People’s Master!”

On 10th April 2016, the Golden Jubilee year for the formation of the International Taekwon-Do Family (ITF), in recognition for his work promoting and teaching the Art internationally; establishing the ITFA with its own Headquarters in Alexandria, Sydney; for developing an online real-time teaching tool ViRTUAL Taekwon-Do, FGMR promoted the ITFA Founder to Senior Master VIII Dan at the ITFA Dojang in front of his own students and other Senior Grades who attended the ITFA International Instructor Course taught by FGMR. But the work doesn’t stop there. As FGMR states: “A Master’s work is never done” and Senior Master Rhee strives to continue to promote the Art as the Founder intended. 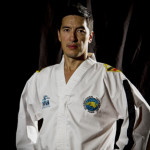