Two days until the 2014 ITFA Student of the Year Awards!!!

With only two days left to the 2014 ITFA Student of the Year Awards, students have only one class to impress Master Rhee – tonight at Randwick!!! This year a total of five awards are up for grabs:

ITFA Most Improved Junior Student of the Year

ITFA Senior Student of the Year

ITFA Most Improved Senior Student of the Year

Paul Rafferty, 1st Kup, was the 2013 ITFA Senior Student of the Year. Here is his repines to winning his award this time last year: 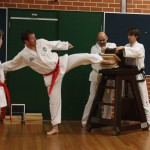 Where are you from?
Maghery, Co Armagh, Northern Ireland

What belt are you now?
2nd Kup Red Belt*

Where do you train?
Redfern & Edgecliff

Why did you start Taekwon-Do?
A friend of mine asked if i wanted to join him and some of his mates at a Martial Arts class in Belfast, I’d already trained for a year doing Aikido and when I researched Taekwon-Do I liked the focus on kicking and punching techniques that Aikido lacked. I joined and never looked back! 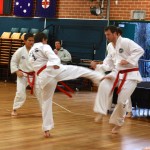 What do you like about Taekwon-Do?
As I mentioned, Aikido lacked foot/kicking techniques. As Taekwon-Do literally translates to ‘foot hand way’ (the way of hands and feet) I knew I would be learning an all-encompassing Martial Art. That’s what drew me to Taekwon-Do; however, what kept me there was how much of the Art is based on scientific principles and physics e.g. The use of a reaction hand when punching utilises Newton’s 3rd law of motion, every action has and equal and opposite reaction – maximizing on the force being produced by the forward moving punching hand. The use of sign wave uses your own body weight to convert potential energy to kinetic. Once you understand and identify these basics you can apply them to every technique and improve multiple aspects of your Taekwon-Do.

What has been your favourite moment in Taekwon-Do so far?
I suppose there’s been three:-
The first was when I got my first Red Belt in Belfast before coming to Australia. I had to do a jumping reverse back-kick through two boards which other 2nd and 1st Gups in my class hadn’t seen done before.
The second was regaining my Red Belt status within the ITFA Association five years later and going through three boards with a side kick (successfully completed on my first attempt and the first time I’ve ever tried it!)
Thirdly, but by no means least, was that without doing any background research and based purely on location and ease of access via train I serendipitously joined the ITFA@Redfern, only to find out 2-3 weeks later that I was being taught by the son of FGMR. A teacher who had trained under and was taught Taekwon-Do by the Founder; General Choi. I feel extremely lucky to be taught the Art by a second/third generation Taekwon-dist and arguably one of the purest, unpolluted forms of Taekwon-Do taught in Australia today. The Founder taught FGMR, who taught Master Rhee who in turn now teaches you and I to give us four degrees of separation from the creator of Taekwon-Do. 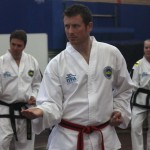 What was your reaction when you received the award?
As Master Rhee talked about the 2013 recipient I tried to figure out who it was and in my head narrowed it down to two or three people, none of whom were me. I first realized he was talking about me when he said “this student texts if he’s going to be late, they even text me to say he was going to be late for the grading today”. At that point I felt extremely privileged to know that I’d been chosen as the ITFA Senior Student knowing there were a number of other adult students that could easily have been chosen before me.

What is your Taekwon-Do goal for 2014?
Black Belt – starting 2014 as a 2nd Gup with a new Red Belt feels like the perfect start to making this year the year I finally gain my Black Belt. It takes a minimum of 12 months solid training and commitment to make the final leap from colour to Black Belt status but I’m more determined than ever to achieve my Black Belt goal in 2014. The thing is, I know that once I finally get my Black Belt the real training begins. As my Belfast teacher used to say “now you’ve been taught the alphabet, time to learn to write”.

What would you say to someone interested in joining Taekwon-Do?
Do it! You could argue the various merits, promoting the tenets, self-defense, fitness, strength and flexibility, confidence building, the social networking aspect or you could simply tell them… it’s fun!

What do your friends think of you doing Taekwon-Do?
When I come in from training my flatmates jokingly ask me if I enjoyed dance class but when I talk to them about Taekwon-Do and the various aspects of it, they know how dedicated I am to training and respect the commitment it takes to learn the many various aspects of something as simple as a walking stance front punch.

Do you want to be an Instructor one day?
Definitely, as I said before, when I talk about Taekwon-Do with my friends I love describing the integral aspects and physics behind each move and why it works. Empowering people to protect themselves and live a healthier lifestyle sounds like a very rewarding role. 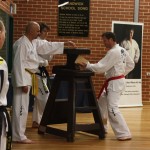 When do you think you will get your Black Belt?
My Birthday? The last two end of year gradings have either been on, or just before my birthday. Barring injury, I’m on target to give myself an amazing 36th birthday present J…. hopefully!”